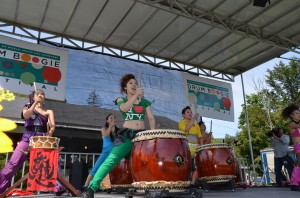 COBU was created as a Live Rhythm Performing Arts Group in 2000. It combines elements of the Japanese traditional Taiko drumming with NY style street dancing. Yako Miyamoto, the founder of COBU is a veteran member of the off Broadway hit STOMP. COBU’S motto is ‘Dance like Drumming, Drum like Dancing’, inspired by the combined sounds of New York and traditional Japanese culture. Their signature sound is created organically through acoustic instruments rather than digital transcription. A 3D film based on COBU by Hollywood director Duane Adler will was released in Summer ’13.